Training for a 5K

Please click the following link for helpful tips on how to prepare your body and mind for a 5k race.

The chart below offers a helpful guide to follow when preparing yourself for a race. An 8 week training schedule will be helpful for runners on every level. Making a daily commitment to preparing for the race will help improve your time and overall performance come June 2nd 2013. 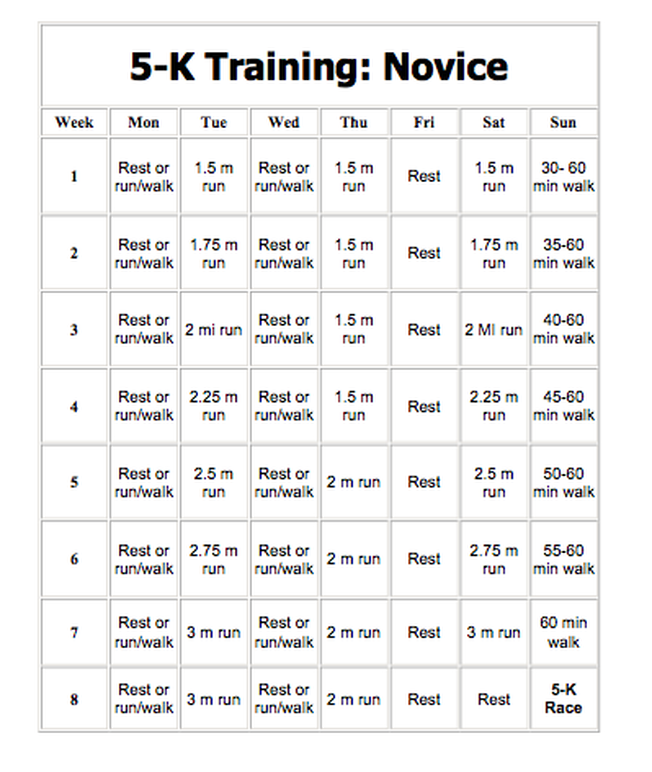 5K Training PlanPicking a 5K -- 3.1 miles -- as her route back to fitness is smart of Gilbert, exercise experts agree. And she's not alone in thinking that training for her first 5K may propel her on the road to lifetime fitness.

It's among the most popular of road racing event distances, says Jean Knaack, executive director of the Road Runners Club of America, a national association of running clubs and events. "The boom is in the 5K and the half marathon," she tells WebMD.

''I think the 5K is a great distance for beginning runners," Knaack says. Or even walkers, as many 5K events are now billed as run/walks.

Why? The 5K is doable, Knaack says, even if you've spent many more hours in front of the TV than on a treadmill, if you train appropriately.

Here, experts talk about how you can join Gilbert in going from the couch to the 5K course, paying attention not only to your physical training but also your mental attitude. In three months or less, you could go from couch spud to fitness star. (It's always recommended, especially for older adults, that sedentary people check in with their physician before starting to train.)

Psych Yourself Up -- and Off the Couch. While most people focus on the physical training -- at least feeling comfortable jogging or walking 3 miles or so before the big event -- mentally preparing is just as important, says Fabio Comana, an exercise physiologist for the American Council on Exercise in San Diego.

Step one, he says, is not thinking about the 3 miles, which can be intimidating, but the steps it takes to get there. ''Think about the process,"' Comana tells WebMD. That breaks down what might seem intimidating -- run 3+ miles when you have yet to run 1 -- into manageable chunks.

For instance, you may tell yourself:  "Long term, I am getting ready for a 5K. But for the next two weeks, my process goal is to be able to get off the couch and jog or walk at a reasonable pace. I will try 1K."

When you have worked up to a 1K, Comana suggests, "Do a self-evaluation." Ask yourself what words come to mind when you finish. If you are thinking pain and fatigue, he says, you're probably doing too much. "If you feel energized," he says, "it's a good indication you will continue."

Each time you meet a ''process'' goal, reward yourself, he suggests. "Go see a movie, buy yourself some training gear."

You can also focus in on the intrinsic rewards of exercise, such as your newfound joy of movement, your gratification at meeting a goal, your sense of accomplishment.

Write down the reasons you want to do the 5K, Comana suggests. It might be to improve your health, lose weight, look better in your clothes. Then list the obstacles, such as: you have to get up earlier to squeeze in the training, you need to buy a good pair of running shoes. The pros most likely outweigh the cons, which is motivating.

Getting Into ShapeJeff Galloway, an Olympian and veteran running/walking coach, is good at taking the intimidation out of a 5K. He tells prospective joggers and walkers:  ''The bottom line for training for a 5K is very simple. You just need to build up your long weekend run to about 4 miles. That makes the 5K relatively easy to do."

Before sedentary people freak at the 4 miles, hear the rest of the advice from Galloway, who has written numerous books, including Running Until You're 100.

You can walk-run the event or even walk the entire event. Galloway says he and his wife, who are both veteran marathoners, take walk breaks throughout running the 26.2 miles of a marathon.

Here is Galloway's ''crash course'' version of his training plan. (For more specifics, see his training chart at the end of this article.)

First, pick the date for your 5K. It should be two or three months away.

If you plan to walk the entire 5K, you can get by with much less training time than if you plan to jog or run all or part of it, he says.

Galloway's training plan works for busy 9-to-5'ers.  He suggests keeping Tuesday and Thursday runs to 30 minutes or less -- even briefer in the beginning, starting at 10 minutes -- and doing the long run (actually a run-walk) on the weekend. Mondays, Wednesdays, and Fridays are devoted to walking or cross training (XT), and Saturday is a day off.

"Back up from the date of the race," he says. ''One week before, do the last long run, which could be a 4-miler. The weekend before that, say 3.5 miles. Count back a half mile each week."